Next In Line x Never Before 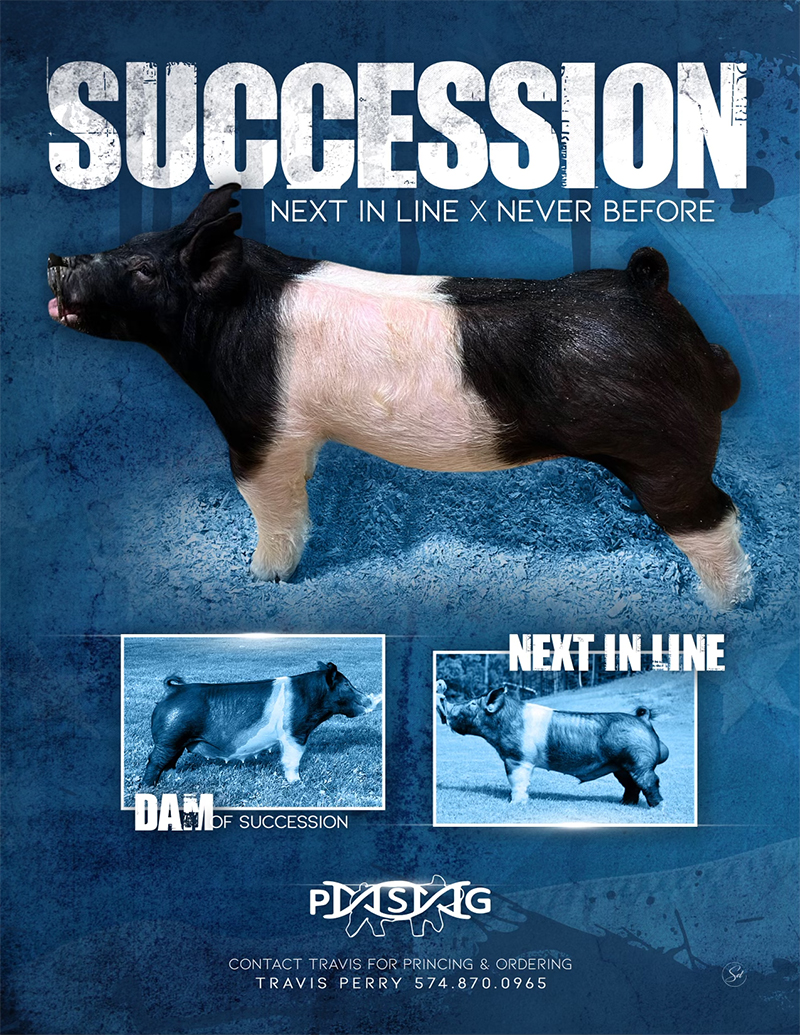 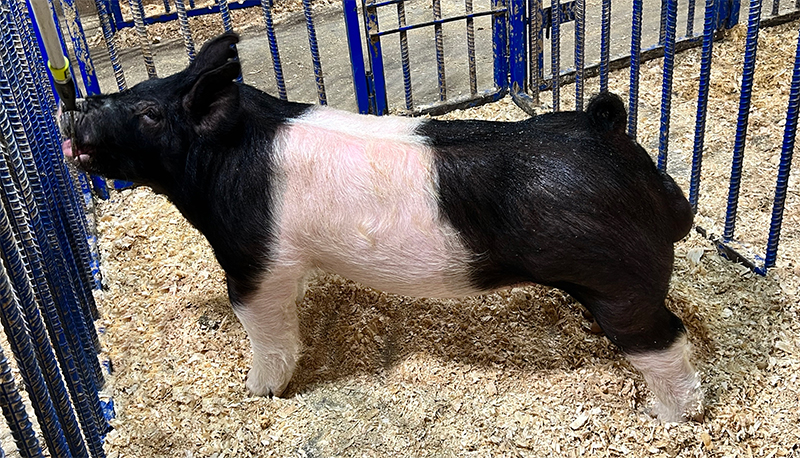 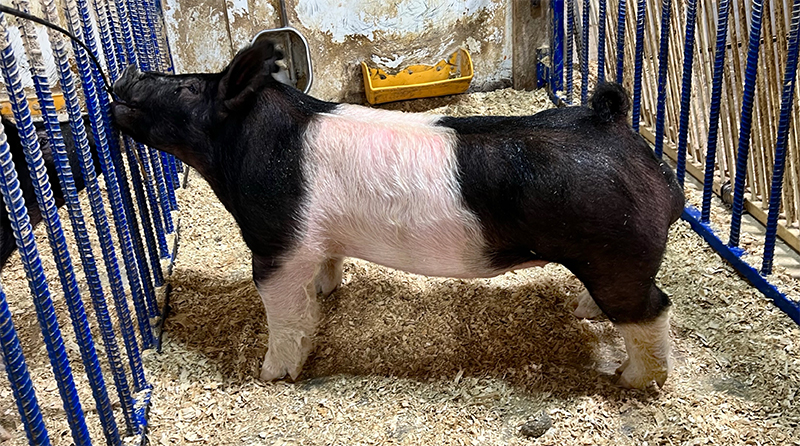 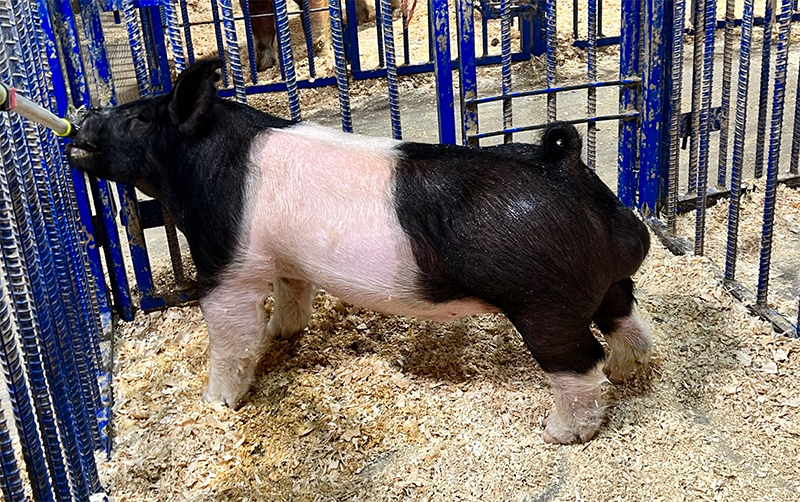 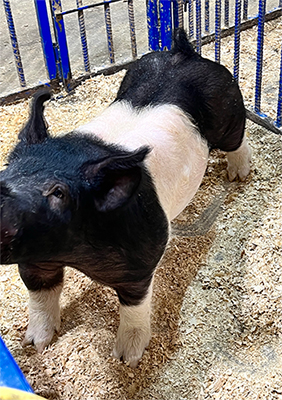 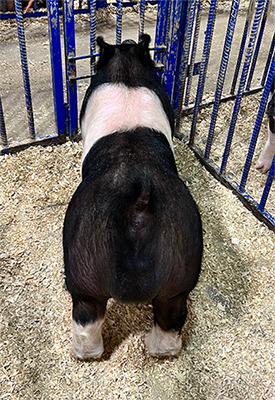 We haven’t been this excited about a boar since Gotham!

I am a big believer of sow power, and combing as many good sows into a pedigree gives us better pigs every time. Succession has an incredible set of sows in his pedigree!  He has been an incredible pig at all stages growing up, and we turned down a lot of offerings from folks wanting to make a barrow and run the southern majors.  He’s very unique in his rib shape— he’s got the look of a whiskey barrel laid in between his ribs. Pastern strength is excellent. Succession’s blade is laid in right, and he has spread between his blades, and squareness of knee and his squareness of hock set are exceptional. Succession has genuine back shape and pin width from behind.  If I could mass produce his skull shape alone, it would help most hogs out there.

Succession is the perfect name for this boar! Why, you ask?

Succession brings so much to the table when you analyze him in person. The pictures of him were easy to take, yet everyone that has been in says he is even better in person!  Come see Succession at the farm, he won’t disappoint!

Next Intention x Lock it Up 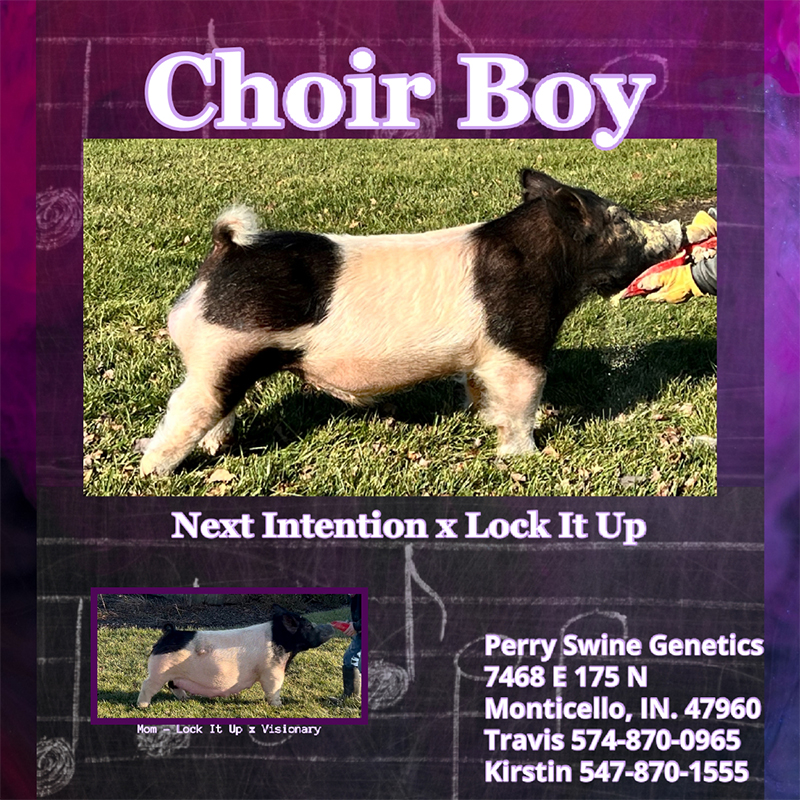 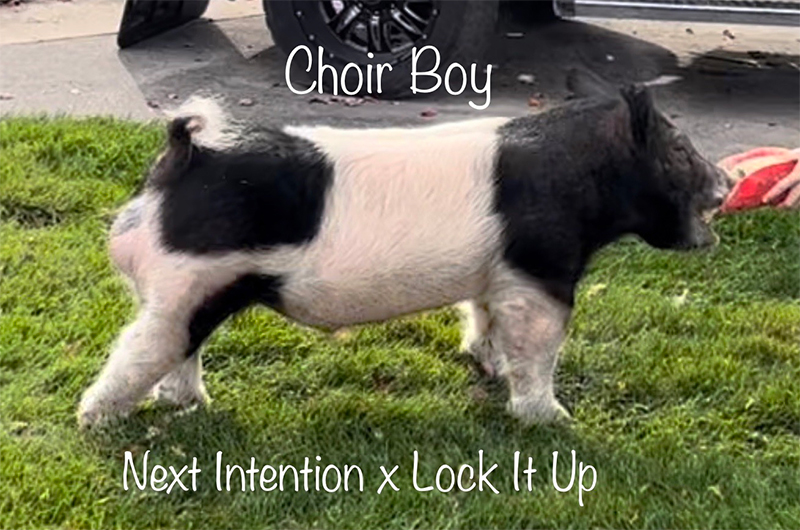 Sired By Next Intention and back on one of our Lock It Up X Visionary sows.  We have loved this guy from the very beginning and had sows slated to breed to him as soon as we could get him going.  Short backed and round ribbed!  We love the stoutness this guy has yet still extended in his neck.  We feel he has some of the best range of motion for something sired by Next.  He is very square in his build, and we feel Choir Buy is the “Next” we have been looking for!  Choir Boy has been described by those that have seen him as the best hip they have seen out of the Next line. Choir Boy comes from a great sow and a great litter.  We have been using him hard!

Unashamed x Up The Odds 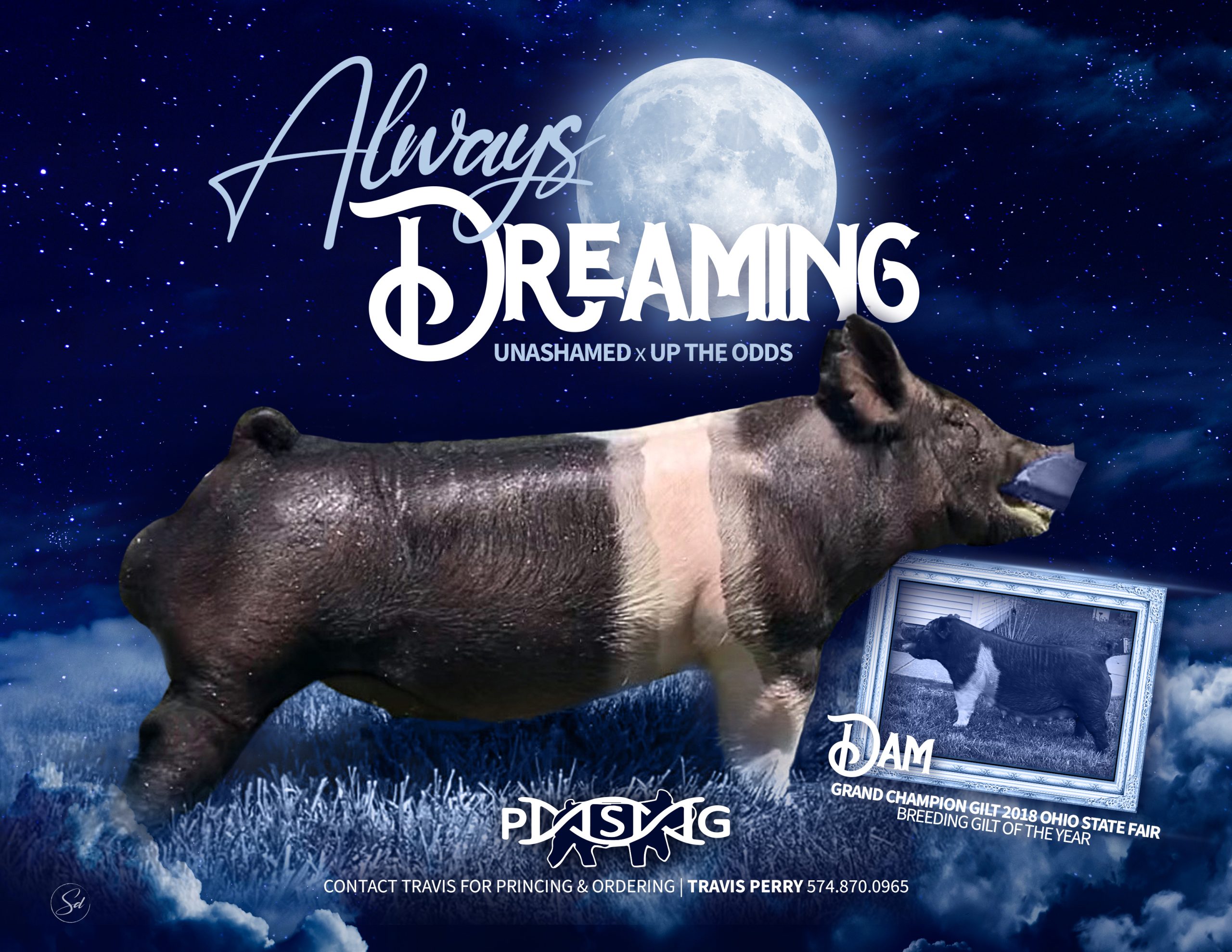 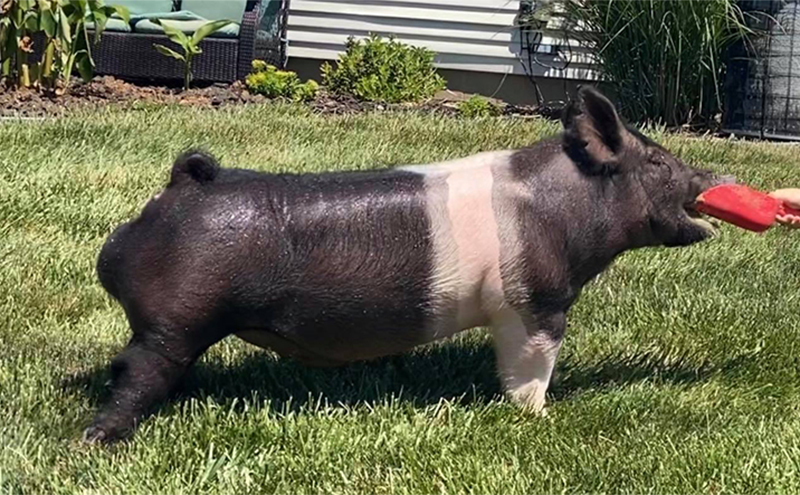 Always Dreaming is sired by Unashamed, the Cruel Intentions son, raised by Brockman and now standing at Moyers. Always Dreaming’s mom is the $13,500 Vegas Showcase purchase we made. She was Grand overall at Ohio St Fair and voted Breeding Gilt of the Year on Pig Planet.
We love this guy for so many reasons. He is stout boned and massive in his rib yet big backed and square. We feel he can breed a wide variety of sows and build them better! I named him Always Dreaming because we, as an industry need to stop telling people to “stay in their lane” when they have a different opinion than others and start promoting our youth to see differences and not be afraid of dreaming to get better. Dreams need to become Goals and then Goals can become Reality. Let’s Always Dream to make them better and then do it! 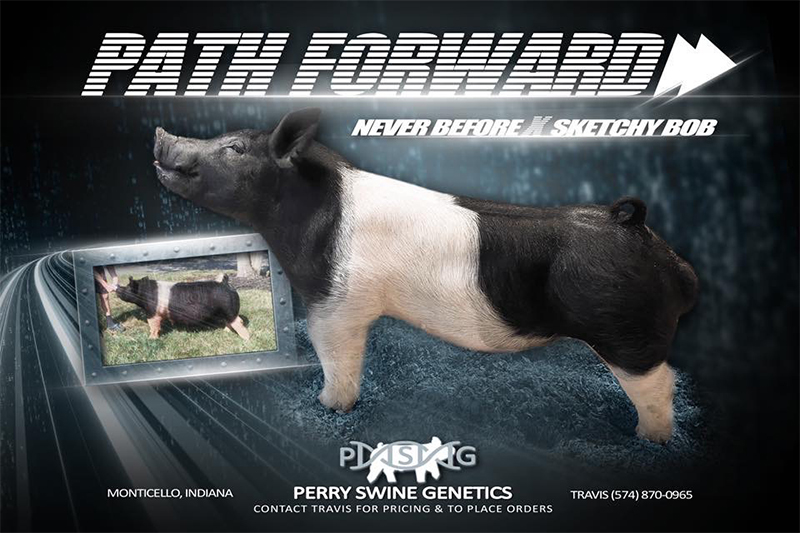 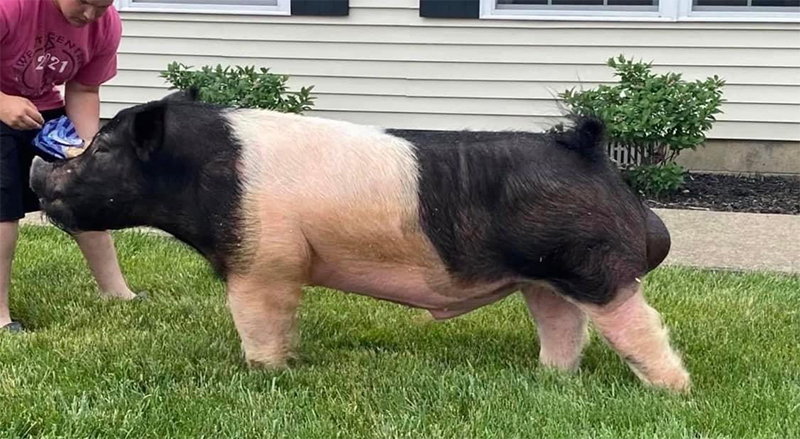 I’m not sure I have ever named a boar more appropriately. We feel this guy is the Path forward for our program. Out of an incredible litter from one of our best combination sows. The mother is a sow we call Scorpion. Scorpion is out of Sketchy Bob who is a littermate brother to the mom of Prove it @Swine Genetics International and Round Here Buzz. Scorpion’s mom is also the mother of Costello @Top Cut Genetics. So, Path Forward combines our very best sows in one hog. Path Forward is the tallest shouldered cleanest throated Never Before we have seen. Absolute great barrow build! If we can mass produce barrows like this guy it will get very fun! Path Forward’s littermate brother won Grand at a county in Texas and another littermate was Reserve at another jackpot in Texas. Use this guy with confidence, we sure are!
Reports on his pigs haves been incredible, and we agree that we LOVE them

BOARS STANDING AT OTHER STUDS 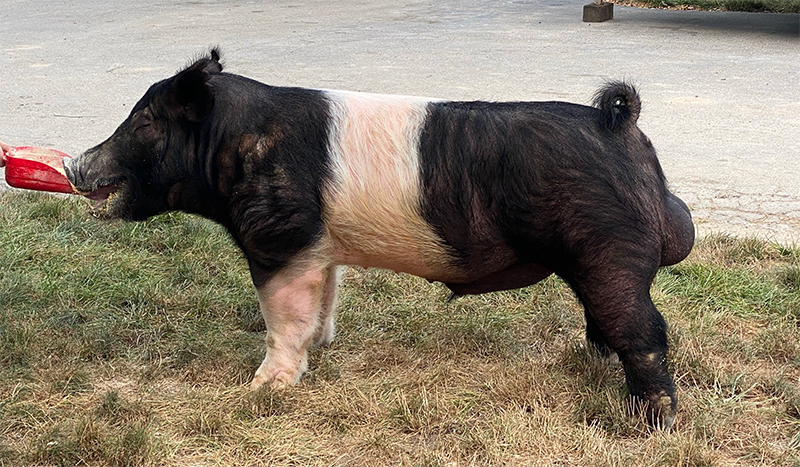 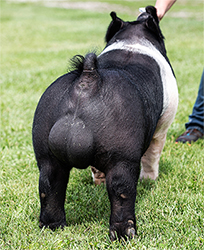 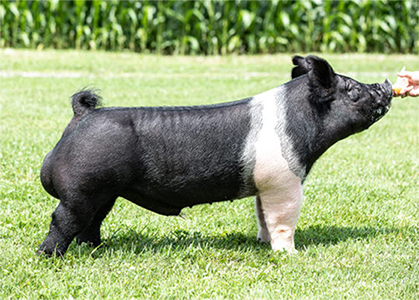 Unashamed X Up the Odds (Chewy) 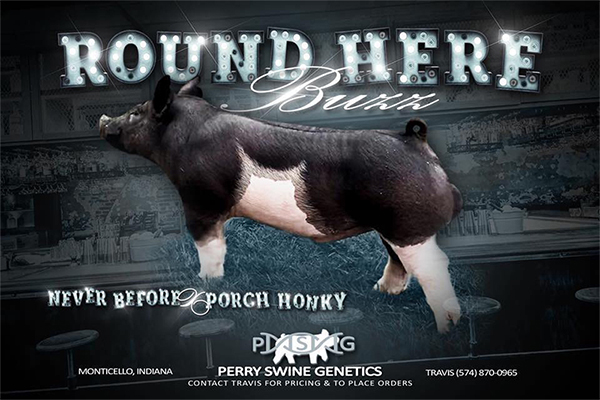 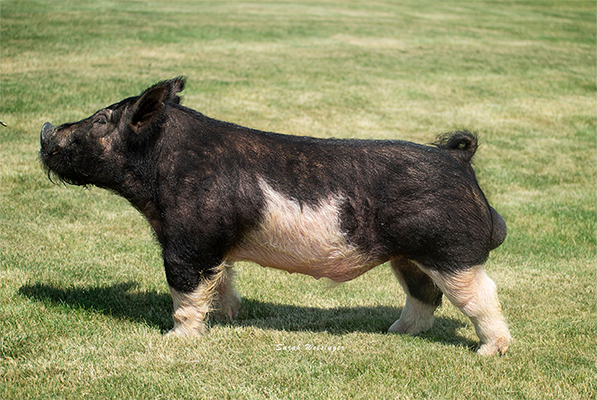